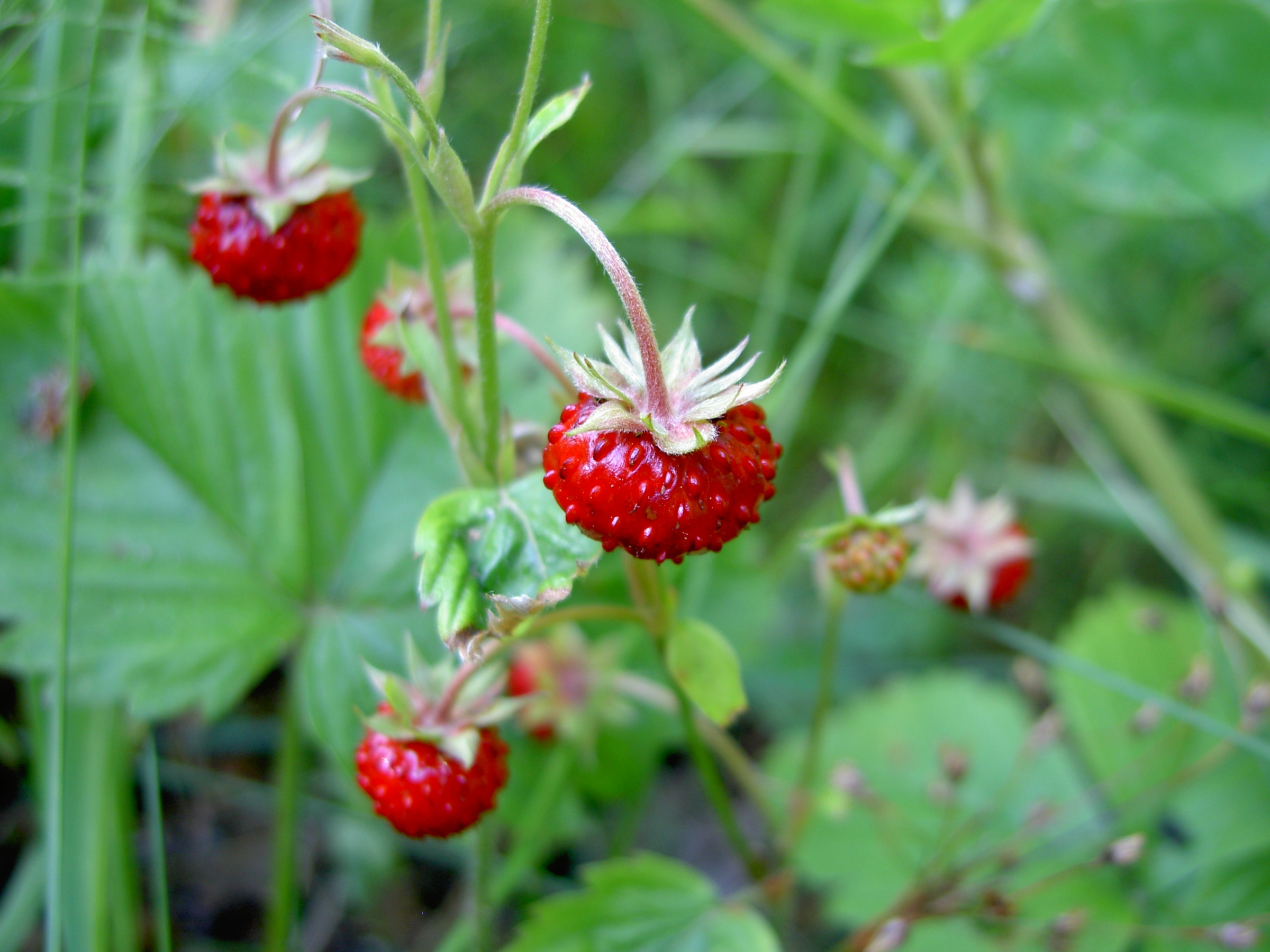 Picture it; An abandoned field of wild strawberries, ripe and shimmering under a bright June sun. The field is isolated, bounded on three sides by leafy, benevolent hardwoods. A light breeze moves gently through the leaves and sparse grasses.

A Berry in History

I’m not alone, of course, in my love of this summertime fruit. The wild strawberry {Fragaria virginiana, or F. vesca} held a special place in the lives of several Native American tribes – in their mythology, diets, and medicine – which they shared with early settlers.

In Medicinal and Other Uses of North American Plants, Charlotte Erichsen-Brown reveals some uses of the wild strawberry plant through the eyes of early Europeans, whose research was likely based on what they learned from these native tribes as well as their own observations. From a 1643 quotation from Roger Williams in reference to his association with the Narragansett people; “This berry is the wonder of all fruits growing naturally in these parts. It is of itself excellent; so that one of the chiefest doctors of England was wont to say that God could have made, but God never did make, a better berry. In some parts where the Indians have planted, I have many times seen as many as would fill a good ship.”

In 1785, Manasseh Cutler, one of the first non-native Americans to significantly research the botany of the Americas, described the uses of wild strawberries; “The fruit in its uncultivated state, if the soil be rich, is large and well tasted, but may be greatly improved with culture. It is subacid, cooling… Dr. Withering says they promote perspiration, impart a violet smell to the urine, and dissolve the tartarous encrustation on the teeth. People afflicted with the stone or gout have found great relief from using them very freely. Hoffman says he has known consumptive people cured by them.”

In 1828, the botanist Constantine Samuel Rafinesque explained; “Although strawberries have been commonly considered as an article of food, they highly deserve a place among medicaments, which are not the worse, I should think, for being palatable. Linnaeus introduced them in his Materia Medica… They are useful in fevers, Gravel, Gout, Scurvey. Phthisis {pulmonary tuberculosis}. They are cooling, promote perspiration, give relief in diseases of the bladder and kidneys… Hoffman and {Carl} Linnaeus have long ago extolled them in gout and phthisis; persons laboring under these chronic complaints ought to eat them frequently when in season, and use at other times their Syrup. They possess all the properties of curing chilblains {inflammation of the skin’s small blood vessels in response to cold}… The plant and leaves have nearly the same properties, although they are less cooling and more astringent. Both have been employed for sore throats, swollen gums, bowel complaints, Jaundice, and fevers in infusion and decoctions.”

Botanist Ronald Campbell Gunn in 1859 noted; “Strawberry leaves and roots are an excellent astringent and useful in bowel complaints, especially for children. A strong decoction or tea may be made of them, or of leaves alone, and used freely, or a syrup or cordial may be made… the roots alone are also said to be diuretic. The berry is a very delicious fruit and to most persons healthy.”

A study by a Canadian pharmacy in 1868 honed in on what it considered one of the berry’s medicinal constituents; “Dr. T. L. Philson has recently been engaged in an examination of the constituents of the roots of the strawberry plant, and finds it to contain several substances which are closely allied to some which are yielded by cinchona {a South American tree that contains quinine}. One of these, which he terms fragarianine, is a kind of tannin allied to quinotannic acid, but instead of yielding cinchona red, it gives another substance, to which the name fragarine has been applied.”

In 1933, American naturalist Herbert Huntingdon Smith described strawberries’ use by the Potawatomi; “Use the root for treatment of stomach complaints… Gather large quantities for food… They sometimes dry them and at other times preserve them for winter food.”

In 1916, Frederick Wilkerson Waugh, who worked for Canada’s Anthropology Division, described the importance of wild strawberries to the Iroquois; “Among the earliest berry to ripen is the strawberry… These welcome events are celebrated by longhouse ceremonies in which thanks are given, while quantities of the fruit are eaten in the feasts which follow.”

Wild strawberries were very important to the Cherokee. As one version of the legend of strawberries goes; The first couple had an argument and the woman left in anger, walking eastward. After a time, the man followed his wife’s path. Sun looked down on the man with pity and asked if he was still angry. When he responded that the anger had passed, Sun found the woman still striding eastward. In an effort to entice her to stop, Sun conjured lovely, ripe blueberries to grow at her feet but she paid no attention and kept walking. Then Sun created luscious blackberries to grow beside the path, but she ignored these, too. Finally, Sun invented a plant that had never grown on the earth before. It covered the ground in front of the woman and suddenly she became aware of an unfamiliar fragrance. Stopping, she looked down on the plants with shiny green leaves, a few white blossoms, and aromatic red berries. She picked one and tasted it – sweet and delicious. As she ate the berries, the anger faded and she thought of her husband and how the two had parted in anger. She gathered all the berries she could carry and turned westward toward home. She met her husband on the path and they shared the berries. Then they walked hand in hand back home.

The Cherokee word for strawberry is ani, and the rich lands of old Cherokee country were noted for their abundance of ani and other wild fruit. Even today, strawberries are often kept in Cherokee homes. They remind us not to argue and they serve as a symbol of good luck.

An Abenaki woman told me another version of the story; Long before white settlers came to the area, a young Abenaki couple had a lover’s quarrel. The young woman ran across the fields and into the forest, her tears falling as she ran. After a time, when she hadn’t returned, the young man grew concerned. It was a brief spat, after all, between two people who loved each other very much. While searching the ground for her footprints, he discovered small, red, heart-shaped berries amidst low-growing green leaves. He was sure they hadn’t been there before; in fact, he’d never seen or tasted this kind of berry, and he knew the land quite well. He had no way of knowing, of course, that wherever his lover’s tears had fallen, a strawberry plant with ripe berries sprouted from the ground. Mystified, the young man followed the trail of heart-shaped berries right to his lover. She stopped crying and they happily reunited.

The wild strawberry is a perennial herbaceous plant that belongs to the rose {Rosaceae} family. Its stalks have three toothed leaflets and paper-white flowers that usually stand above the leaves. The fruit has tiny seeds. Since strawberries have multiple ovaries, the strawberry is, in fact, not a true berry. Like raspberries and blackberries, strawberries are known as aggregate fruits, meaning they’re formed from multiple carpels. But while the former two fruits are considered “drupes” {each drupe contains a seed}, botanists classify strawberries as achenes – the name of the little yellow ovals covering the surface. These actually contain the seeds.

If you’re lucky enough to find them, wild strawberries usually grow along roadsides, woodland trails, and meadows. They need sufficient sunlight to produce fruit and tolerate a mix of moisture levels, though they will not fare well in extreme wet or dry conditions. Their range includes as far north as Labrador and as far south as Georgia. There are many variations in size and shape of the berry in the wild, runners from the roots produce new plants.

A favorite recipe my family enjoys, this dessert really showcases the flavor of the wild strawberry.*

Mix well and heat in a double boiler over boiling water; cover and steam for about 1 hour.

2 cups crushed strawberries, juice and all

Blend together gently with a mixer or eggbeater. When the bread has finished steaming, slice and serve with strawberry sauce.

*Note: I suggest using only eggs from organic, cage-free hens since you won’t be cooking the egg whites. {This recipe came from the days when we had our own laying hens and didn’t worry about salmonella.}

As one author notes; ‘Wild strawberries are one of those fruits where not only the berries themselves are great for medicinal use, but the whole {darn} plant as well...”! Anthocyanidins, the fruit’s colorful pigments, are powerful antioxidants useful in preventing heart disease and other inflammatory conditions. One study from the Harvard School of Public Health revealed that women who consumed 16 or more strawberries per week were 14 percent less likely to have high levels of C-reactive protein {CRP}, a substance the liver produces in response to inflammation. According to The Journal of Agriculture and Food Chemistry, these anthocyanidins show promise in burning stored fat, making them a potential aid in weight loss. They can also boost short-term memory, according to that same publication.

They also serve as a low-calorie source of vitamins C and K, as well as fiber, folic acid, manganese, and potassium. And their content of biotin and ellagic acid promotes strong hair and healthy skin.

According to the Archives of Ophthalmology, consuming three or more servings of berries {including strawberries} can lower the risk of macular degeneration.

For digestion, strawberry leaf tea can help relieve an upset stomach, nausea, and cramping, thanks to the leaves’ tannins, which also help mitigate the symptoms of diarrhea. The tea also acts as a diuretic, and people have found success in using it as a way to soothe a sore throat and treat dehydration.

Lastly, as “Dr. Withering” suggested more than 200 years ago, the fruit offers a natural way to clean and whiten teeth.

Picture it; An abandoned field of wild strawberries, ripe and shimmering under a bright June sun. The field is isolated, bounded on three sides by leafy, benevolent hardwoods. A light breeze moves gently through the leaves and sparse grasses.

A Berry in History

I’m not alone, of course, in my love of this summertime fruit. The wild strawberry {Fragaria virginiana, or F. vesca} held a special place in the lives of several Native American tribes — in their mythology, diets, and medicine — which they shared with early settlers.

In Medicinal and Other Uses of North American Plants, Charlotte Erichsen-Brown reveals some uses of the wild strawberry plant through the eyes of early Europeans, whose research was likely based on what they learned from these native tribes as well as their own observations. From…